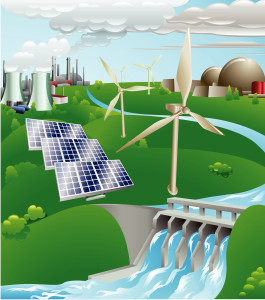 Alternative energy is an interesting term since it is almost political or categorical as opposed to actually describing anything about the energy itself. When someone talks about energy and uses the term alternative energy, it’s important to understand that the normal energy they’re referring to is what comes from burning coal and oil.

Alternative energy is any type of energy that comes from a different source. Normally this refers to ways electricity is produced, although when it comes to cars, it can be used to talk about non-gasoline automobiles, as well. Alternative energy is the general name that’s given to a group of popular methods like solar energy, wind energy, geothermal energy and even, nuclear energy.

While there are some issues and arguments when it comes to nuclear energy and whether it fits into that category or not, generally speaking, it is accepted that way although when many people talk about alternative energy for environmental purposes, they may not include nuclear.

It’s important to understand what is alternative energy because this is a topic that easily becomes political or environmental, but it’s critical for the future of our economy and the advancement of society. Energy needs continue to grow while gas and oil are finite supplies.

Geothermal energy is one of the least commonly used alternative energy sources, in large part because on a large scale you need volcanic or extreme natural heat from the Earth for it to be viable on a large scale. Places that have access to that type of flow can use geothermal as a natural, clean, and powerful energy source for environmentally-friendly electricity.

Wind energy is another extremely popular option with several US states and even some European countries receiving anywhere from 20% to 50% of all their energy from wind sources. These are the giant white windmills that you may see in fields or even lined up in rows out in an ocean. The motion generated by the wind becomes electricity. In many areas, this is one of the fasted growing forms of alternative energy.

Solar energy is probably the most well known out of all the alternative energy options, and as the technology is getting better and better, solar energy is becoming inexpensive and more efficient. Many homes have individual solar panels to supplement power, and there are even backpacks and street signs/lights that have little solar panels helping to power them throughout the day.

The sun’s rays are always going to come back – so it makes sense to look at solar power as a long term option.

When you want to know what is alternative energy, that’s what people are talking about. Energy that is environmentally friendly and comes from sources that can be renewed. Think non-fossil fuel sources for electricity and you’re on the right path to more fully understanding the alternative energy movement. This is a shift that is going to continue for the long term.