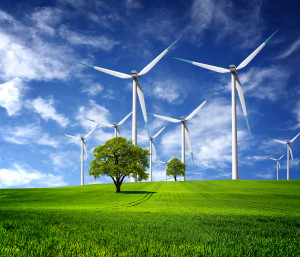 Harnessing the wind to produce energy is not a new concept. For hundreds of years, windmills have been used for grinding grain and pumping water. Today’s industrial windmill is called a wind turbine and is used to generate electricity.

The blades of the turbine sit on top of a tower so they may capture the most wind. These towers are often more than 100 feet above the ground and at this height can take advantage of less turbulent and faster winds. There are typically two or three blades mounted on a shaft and forming a rotor. These blades catch the wind, turning the rotor to create energy which is later converted t electricity.

There are many wind turbine facts available to help understand just how wind energy works. There are proponents and opponents of wind energy, but the reality is that this is a good, renewable energy source and it is growing in popularity.

Here are ten wind turbine facts that will demonstrate just why wind energy is gaining such popularity.

These wind facts demonstrate that even though there is still much to be learned about harnessing the wind to produce electricity, it is clear that wind power is here to stay. Much will depend upon environmental regulations, available tax credits, technology advancements, and how competitive wind remains against other renewable energy sources.